Most subjects who train strength opt for bilateral exercises in their routines, being much more forgotten the exercises performed unilaterally , despite the multiple benefits they have.

In this article I will explain to you what benefits unilateral training has and why you should include it in your routine, without ruling out bilateral exercises. 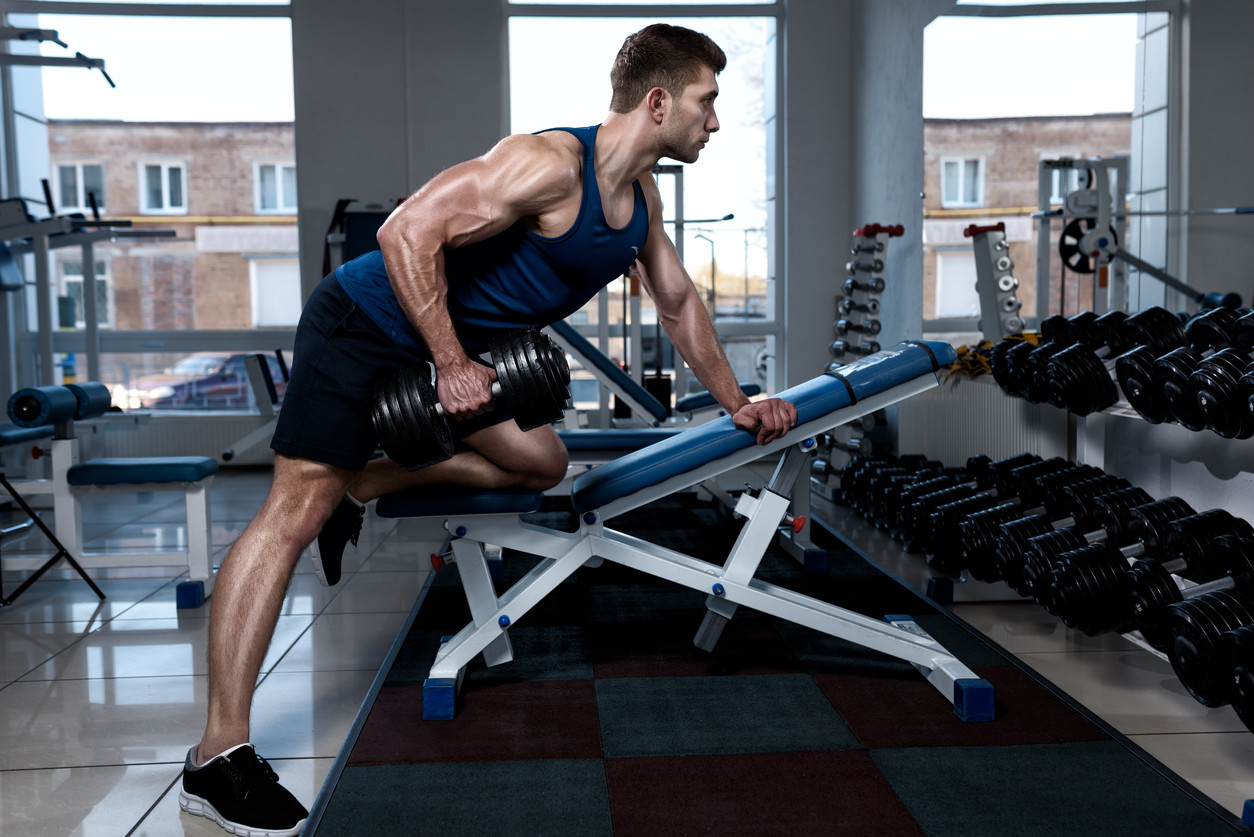 Unilateral exercises are those in which you work with one side of the body independently of the other , either upper or lower extremities.

For us to understand, some examples of unilateral exercises are:

As you can already guess, the bilateral exercises in this case are those made with both hands or both legs, that is, both sides work at the same time(typical bench press with bar , typical back or front squats , typical conventional deadlift , etc etc.).

Let’s see why you should include unilateral training in your routine.

1. Greater work of the core and improvement of stability

The core refers to a large number of muscles that make up the entire middle body area .

These muscles include the rectus abdominis, the internal and external obliques , the transversus abdominis , the psoas, the lumbar quadrate, the pelvic floor , the latissimus dorsi, the serratos, the spinal erectors of the spine, the multipidids, the musculature of the hip, the buttocks , …

These muscles serve to stabilize the body and protect the spine , preventing it from moving, so we must train them for this function (I will not go into more depth here since this month I will write an article about the core and why you should stop doing the typical abdominal).

The point is that performing one-sided exercises, whether with dumbbell , elastic band , pulley or your own body weight (like a one-legged squat) makes you struggle with the resistance on one side only.

During the execution of the unilateral exercise, this resistance tends to unbalance us, which forces a recruitment and a greater activity of the muscles of the core(middle area) to keep us stable.

This has been proven in different studies , demonstrating a greater neuromuscular activation of the core and a greater stabilizing work when the exercises are performed unilaterally compared to bilateral.

By the way, as a council, in addition to adding unilateral exercises, it performs both these and the bilateral ones standing instead of sitting, and free rather than machine .

And I say precisely because of this, because standing and free we increase the work of stabilizing muscles(core).

When we are sitting and we use guided machines, we remove a lot of stabilizing work (core), which is very beneficial.

2. Decrease of imbalances between extremities, correction of bilateral deficit and improvement of performance

Whether in strength or hypertrophy (muscle mass gain), unilateral exercises have the benefit of reducing muscle imbalances between extremities (body asymmetries).

Unilateral exercises have the benefit of reducing muscle imbalances between extremities

It is very normal that the strong limb do more work than the weak limb when performing bilateral exercises ( squats , bench press , chin , …), which can lead to an imbalance.

Continuing to train exclusively bilaterally will not reduce or correct it. However, when training unilaterally each side or limb works independently doing the work that is his / her job .

Science has shown these benefits and there are many studies on this.

For example, and without going any further, a recent study published in 2017 on young basketball players has reported that unilateral training obtained much better results than bilateral training in different aspects.

Going into detail, greater benefits of unilateral training were reported in the reduction of imbalances between extremities, in the correction of the bilateral deficit and in the improvement of performance (in this case in the changes of direction and in the maximum output power with both legs).

3. Improvement of the contralateral part: the phenomenon of “cross education”

Therefore, contralateral refers to things on opposite sides . That makes a person’s arms and legs contralateral (in addition to the lungs or ears, for example).

Speaking of training, the increase in muscle strength in one limb after training the muscles on the contralateral side (training one limb increases the strength of the other untrained extremity) has been widely documented for many years.

This phenomenon has been termed “cross education” and alternatively as “contralateral force training effect”, “cross transfer” and “cross training”.

In recent years, the increasing attention towards contralateral training (particularly in clinical scenarios) has led to an exponential increase in the number of articles focused on “cross education”.

The purpose of a recent meta-analysis published this year 2017 has been precisely to review the current findings of the research regarding the phenomenon of “crusade education” after the unilateral strength training and to determine the general magnitude of contralateral force gains.

Well, the current data confirm the existence of a “cross-education” effect of strength and indicate that unilateral strength training induces moderate-large gains in strength in the untrained contralateral limb (contralateral gains) in healthy subjects, according to the type of contraction and the body region.

It was revealed a combined effect of “cross education” of strength of + 11.9% . Going into more detail, this meta-analysis has reported that this training produces average improvements of + 9.4% for the untrained upper limb and + 16.4% for the untrained lower extremity .

The accumulation of future high-quality research carried out not only in healthy subjects but especially in clinical populations will probably have an important impact in the quantification of the actual magnitude of the “cross-education” effect of force and, more importantly, of its possible practical implications and their impact on rehabilitation.

So, only unilateral training?

No. We have just seen that unilateral training has many benefits (improvement of the stability and work of the core, reduction of imbalances between extremities, improvement of different aspects of performance, etc.) and that we must include it in our training routine.

This does not mean that we have to discard the bilateral training and not return to perform a domination , a squat or a bilateral bench press .

Of course we can train them and have a multitude of benefits . In fact, it will be the exercises with which we will probably increase our strength and muscle mass .

What I want to say is that we must include both in our training routine, since both have benefits, being better one or the other depending on the objective we have.