The abdominal workout (and generally, the core) in suspension with TRXis increasingly popular as a training tool.

In abdominal training in suspension with TRX, the lower or upper limbsare hung with free straps (TRX) for oscillation.

Many exercises aimed at the abdominal muscles are designed with such a device, creating a wide variety of challenges. 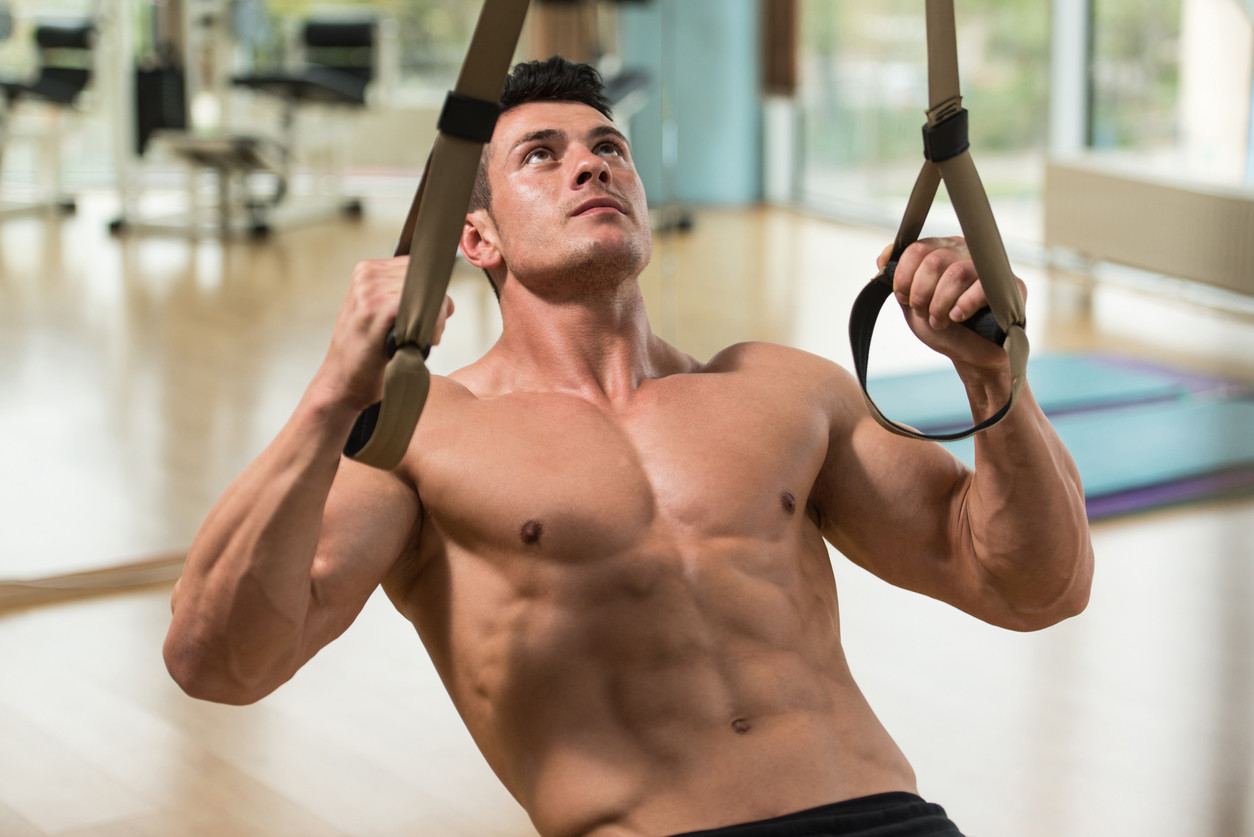 These exercises consist of multiplane and multiarticular movements , and are executed with complex techniques.

Why the choice of these three exercises?

The quantification of muscle contraction intensity is a key factor in establishing the training effects induced by exercises in suspension with TRX.

The training of the core (core), which includes the abdominal muscles, requires a high intensity training and an overload of the global muscular system.

To facilitate comparisons between exercises, studies usually classify muscle activation (measured with electromyography) in four levels according to the percentage of maximum voluntary contraction :

The maximum voluntary contraction is the highest tension that muscles can develop when they contract, quickly, against a resistance, maintaining tension for at least 3 seconds.

In this case, the choice of these three exercises in suspension with TRX ( roll out, body saw and hip abduction in plank ) is due to the fact that all of them have shown a muscular activation above 60% of the maximum or very close voluntary contraction to the same.

It is the exercise of the three that most activates the rectus abdominis , both the lower part and the upper part of it (especially the lower part), and the external obliques , reaching an activation well above 60% of the maximum voluntary contraction in said muscles, that is, a very high level of activation.

In turn, the activation of the internal obliques is also located at moderate-high values ​​(around 40% of the maximum voluntary contraction).

The position assumed in this exercise is a tilted standing position while placing each hand on the handles of the TRX straps.

The elbows and wrists are placed under the shoulders, with the armsperpendicular to the floor and the shoulders flexed at approximately 45 degrees.

Once well placed, the shoulder is flexed, moving the hands forward , keeping the abdominal muscles and the gluteus muscles contracted at all times.

Variants: for greater activation, a greater shoulder flexion can be performed as well as a backward movement of the feet for a greater inclination (as long as a correctly aligned posture is maintained).

It is an exercise that has a very high activation (> 60% of the maximum voluntary contraction) of the lower part of the rectus abdominus , although it does not reach the values ​​that are reached with the roll out.

The position assumed in this exercise is a prone position , placing the elbowsunder the shoulders, with both forearms touching the ground, while each foot is placed on the handles of the TRX straps.

The body is aligned horizontally with the shoulders and elbows at 90º of flexion.

Once in this position the shoulders are flexed and the elbows are extended pushing the body backwards , keeping the abdominal muscles and the gluteus muscles contracted at all times.

Variants: for greater activation you can rest your hands on the ground with your arms stretched instead of resting your forearms.

Even mix both (this is already a very high level) starting with the forearms in the backward movement and lifting them until they are supported by the hands in the forward movement.

The position assumed in this exercise is a prone position , placing the elbowsunder the shoulders, with both forearms touching the ground, while each foot is placed on the handles of the TRX straps.

The body is aligned horizontally with the shoulders and elbows at 90º of flexion.

The action involves abduction of the hip (open and close the legs) while maintaining the trunk in a horizontal plane and the abdominal muscles and gluteus contracted at all times.

Variants: for greater activation you can rest your hands on the ground with your arms stretched instead of resting your forearms.

Can I perform large ranges of movement?

The people who perform these exercises and reach the necessary ranges of movement in each one must perform them with the correct execution of the technique, always maintaining a neutral position of the spine and pelvis .

The distance of displacement in the exercises of roll out and body saw will be marked by our stability and alignment of the back.

The point of displacement (forward in the roll out and backwards in the body saw) in which the back begins to curve and the abdomen can not be kept properly tightened will be the reference point , so the displacement must be finished a little before, without letting that curvature occur.

It is highly recommended that a certified strength and conditioning trainermonitor the performance of these exercises to ensure they are executed correctly, considering their technique.

Correct posture and security first of all.

How long should the contraction last in these exercises?

Being isometric exercises of greater complexity and activation, it is not advisable to make contractions that are too long .

It is better to perform short sequences so that the abdominal muscles are properly oxygenated and not excessively fatigued, allowing you to get the most out of the exercises.

An example of a sequence can be the following:

As for the number of series , there is no recommended series number.

Depending on the number of exercises we want to perform and our previous or subsequent work in that training session, performing between three and six series per exercise may be appropriate.

At the same time, we must bear in mind that we have had to follow an adequate progression from lower to higher complexity exercises, without moving towards these exercises until we have experience and strength in less complex and intense exercises, such as other types of exercises. plates on stable surfaces or even on fitball.

There is increasing evidence that exercises for abdominal work in suspension with TRX involve very high levels of activation of the abdominal muscles, even relatively greater than exercises performed on stable support surfaces or fitball (Swiss ball).

The roll out and body saw exercises can be considered suitable for training the strength of the rectus abdominis and the external obliques, and can be used to adequately strengthen the superficial antero-lateral aspect of the abdomen.

In the case of the exercise of hip abduction in plank (hip abduction in the plate position), it can be considered adequate for training the strength of both the external and internal obliques and the transversus abdominis.

This knowledge about the muscular activation of the abdomen with different exercises in suspension with TRX can have a particular relevance for well-trained individuals given the high demand imposed by these exercises.