The elastic bands or bands of resistance are one of the most useful accessories that we can acquire in any fitness store at a low price and with which we will be able to work our entire body without the need to be in a gym and have to have machines , weights or bars.

Using elastic bands for the work of squat we will add intensity to our exercise without using heavy loads that can injure us, since we will work only with the reisitencia of the band itself.

We can perform squats with both legs and replace them with one-leg squats or strides, since the mechanics and techniques are very similar. 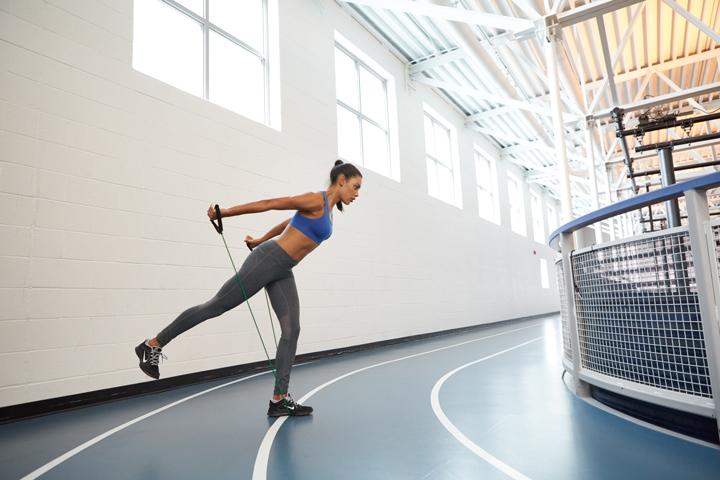 With the dead weight, our goal is to work the entire posterior chain , since it is an exercise that will affect both the musculature of our lower back and the buttocks and hamstrings .

Using the resistance bands for this exercise, we will avoid the use of excessive loads and we will be able to focus on the technique in order to avoid injuries . It can be a previous step to the realization of the deadlift with bar and discs in the gym. It is important to note that performing this exercise with elastic bands aims to learn and internalize the technique , since it is more difficult to perform without weight than with weight and, in addition, a deadweight without weight, has little use.

The advantage of using elastic bands to perform the bench press is that we can work either lying on the ground or a bench or performing the standing exercise. When using these bands, we will always be working with the same degree of resistance (at least while using the same band) and we will reduce the risk of injuryby eliminating the possible fall of the bar.

As in all the exercises that we are seeing with elastic bands, in the bench press it will also be a help in improving our technique and correcting the positioning errors we may have, especially in terms of the protection of our shoulders, that many people tend to precede them when they can not lift the weight and this generates a lot of instability in the glenohumeral joint.

The push-ups are one of the exercises in which sometimes we tend to stagnate frequently, and adding a band of resistance to our training in this exercise will allow us, without a doubt, to break that stalemate .

Back shoulder with elastic bands

The posterior head of the shoulder is one of the areas that we find most difficult to isolate , so this exercise will be a very useful option when it comes to doing a good job. In addition, as it tends to be a part that we tend to have quite weak, start working with elastic bands is perhaps the best alternative to go developing this area before starting to work with weights.

Because the great part of the movement that we make in our day to day with the glenohumeral joint is in the frontal plane, it is vital to incorporate exercises that work the posterior shoulder area in order to strengthen it and avoid injuries that may come from a bad movement or because of the weakness of the area.

When performing this exercise with elastic bands, we can do it by focusing on a slow and controlled movement , keeping the tension stable throughout the movement.

The military press is an exercise thanks to which we can incorporate its benefits in our day to day , because it corresponds to the movement we would make when trying to place an object on a raised surface, for example, a box on a shelf.

As with the deadlift, performing this exercise with elastic bands will help us to perform it with a correct technique and avoiding stale postures that could lead to injuries.

The pallof press, as we have already commented on some other occasion, is one of the best exercises to work on our core and, specifically, the obliques.

We must remember that the core musculature is designed to slow down movements instead of generating them , hence exercising “crunches” based on crunches other than harmful is inefficient . However, introducing this exercise to work the core is a much more valid alternative, since the main objective is to stop the rotation movement generated by the elastic band .

Rowing with elastic band is one of the best exercises that we can include in our routine to work the muscles of our back and, since we do not use weights but work with resistances, it is a great alternative for those who have back problems .

In addition, since we avoid the use of weights, we can focus on the technique and perform a scapular retraction in the final part of the movement, which will allow us to provide more stability to the entire gleno and scapulohumeral joints.