Dog Collars and Leads have been used as symbols of ownership and accessory pieces for dogs for many years. There are so many different types available nowadays and you can colour coordinate them with door coats and other doggy accessories. If you want something special then take a look at Dog Collars and Leads through Iwoof 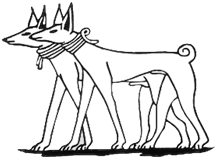 Dog collars in particular have a long history with dogs wearing collars depicted in painting for ancient Egypt and dating back to 3500 BC. It is thought that these dogs weren’t so much pets as they were animals used for hunting or protecting both humans and other animals. The collars they were are thought to be made from leather and had an inscription with their name on it.

ogs being used as protectors is a common theme throughout history and the ancient Greeks also used them to help protect their livestock from other predators. The collars worn by these Greek working animals were also made of leather but had inset into them spiked nails that were placed int eh collar to protect the door from any predator attacks and inflict pain on any other animal that tried to attack the dog. 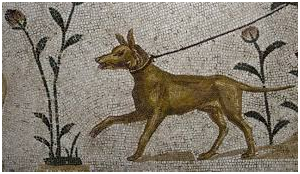 It is thought that it was during Roman times that people started to treat their dogs with loyalty and affection and it is said that Caesar told off his subjects for being more devoted to their dogs than they were to their own children. Mosaics dating back to Roman times show dogs wearing collars that are much more ornate that the leather ones from Greek and Egyptian times. They were often covered with jewels.

By the time we reach the Middle Ages dogs were being used for a variety of different jobs and their collars were used as a way to depict each job and the status of them. For example, a hunting dog would have a simple leather collar whilst a sheep dog wore a collar similar to the ones used by the ancient Greeks that had spikes on it. A dog that was owned as a pet by a middle-class lady or gentleman would have had a collar adorned with jewels and made from precious metals much like the ones favoured but the Romans.

Following on from this, dogs began to be seen as pets that were to be loved and simple leather collars were the fashion. However, there were on occasion arguments about the rightful ownership of a dog and so a padlock collar was created. The padlock would lock a clasp on the collar and could only be opened by the owner who had the key. This was supposed to be an indication of the rightful owner and was effective as long as the key wasn’t stolen or misplaced!

Nowadays the collar a dog wears is purely down to the preference and financial situation of the owner.