Fashion adverts have the ability to inspire, stun and shock. There have been some incredibly successful campaigns over the years. They have the power to change the way we see the world and often like to make strong statements about society that may seem to have little to do with actually selling clothes. Adverts sell more than a product and can sell values, concepts of success, love, sexuality and popularity. They can also bring important discussions to the forefront by focusing on previously marginalised segments of society.

United Colors of Benetton were one of the first to do this with their often shocking adverts during the 1990’s. Their images featured newborn babies, a man dying from Aids and also people of different ethnic backgrounds hanging out together. We might look at these now and think they are not so shocking but at the time, they were unusual and thought provoking. It was a campaign about forcing things into the public view that had previously been hidden from mainstream media.

Some adverts are remembered for their sheer power of seduction and the Levi’s advert of 1985 was definitely one of these. The advert was shot in a launderette, set in 1950’s America and featured a toned guy getting his kit off to the tune of ‘I heard it through the grapevine’ by Marvin Gaye. Something about this ad ticked all the right boxes and Levi’s took off in the UK and achieved iconic status. The advert was voted at number 4 of the 100 greatest adverts of all time, such was it’s impact. For Mens Designer Jeans, visit http://ejmenswear.com/. 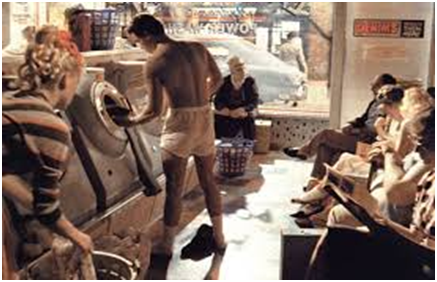 Calvin Klein and Kate Moss were a match made in heaven during the 1990’s and Kate shot to super stardom due to her appearance in their advertising campaign. It was a controversial move due to the fact that she represented a new look in models, grunge-style, androgynous and slightly malnourished. This was a trend that soon became popular on every catwalk across the globe and made CK the biggest brand of the decade.

Another brand that was said to have stopped traffic was the Wonderbra advert of 1994. This billboard featuring the words ‘Hello Boys’ was the result of a £16 million advertising campaign in America and the UK showing models wearing just a Wonderbra. It has gone down as the most eye-catching billboard of the last 20 years and was one of the most successful campaigns in advertising history. Wonderbra remains a leading brand in the lingerie market.

Another advert that was hard to forget, as it was slightly sinister, was the giant Reebok belly that chased a man down the street with the threat that ‘belly is gonna get you’. That phrase has now become a general threat for anyone who engages in a little over indulgence and for a sportswear brand, it certainly puts the frighteners on anyone thinking about skipping that jog this week!