Comedy is definitely subjective and what one person finds funny might not be another’s cup of tea. When it comes to British stand-up comedians though, most people can agree that the following are some of the best that the UK has to offer right now. To make your own event a good laugh take a look at Comedians For Hire and visit https://thecomedyclub.co.uk/.

Russell Howard is a familiar face from his appearances on the topical panel TV show Mock the Week. He is an English comedian, television and radio presenter who had his own show called Russell Howard’s Good News.

Michael McIntyre is another well known face who is an English comedian, actor and presenter. A few years ago he was said to the highest grossing comedian in the world! His strengths lie in social satire and observational comedy. He hosted his own comedy programme called Michael McIntyre’s Comedy Roadshow and was a judge on Britain’s Got Talent.

Jimmy Carr has a rather darker comic talent and is known for his signature laugh and absolute deadpan delivery. He is edgy and sometimes controversial with his quick one-liners. He often comments on topics such as politics, sex, current events and celebrities. He is also a writer, actor and presents TV and radio.

Frankie Boyle also makes the list and although not to everyone’s taste, he has been very successful. He is a Scottish writer and comedian, infamous for his pessimism and often controversial satire. He makes jokes about Scottish culture, celebrities, politics and current events and has been known to insult quite a few famous people. He can be hilarious but has been accused of insult comedy which belittles people.

Lee Mack can currently be seen on the sitcom ‘Not going out’ and as a panelist on the show ‘Would I lie to you?’ He’s quick-witted, has great comedic timing and a very funny man indeed.

Billy Connolly is an absolute comedy legend who also had the ability to act a straight role with just as much gravitas as a classically trained actor. He is an excellent storyteller with incredible life experience and has been around for many decades now which shows just what a pure comic talent he has. He can turn everyday events into hilarious tales with his quick-wit and humble approach. Comic genius. 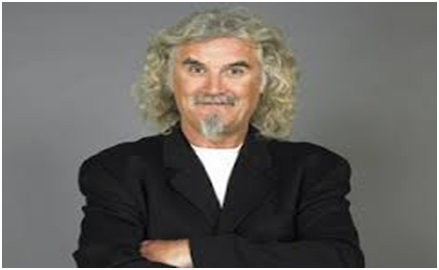 David Mitchell needs to make the list because of his quiet, unassuming but hilarious witticisms. He is an English comedian, actor and writer who is one half of the comedy duo Mitchell and Webb. He can currently be seen on the show ‘Would I lie to you?’ alongside Lee Mack. He doesn’t do stand-up but his sharp wit, great intellect and pessimistic tendencies make him a joy to watch whenever he appears on TV.

Eddie Izzard can make just about any subject or object funny. He has wonderful insight and a curiosity that can’t be quenched, which is very contagious. He offers a cross-dressing sophistication, great intelligence mixed with humour and the odd history lesson thrown in for good measure.