Erected to celebrate International Women’s Day, Kristen Visbal’s Fearless Girl sculpture shows a girl standing, hands on hips, a strong and defiant image of modern womankind. Alone, the sculpture itself, is unlikely to offend. But it is the placement of the Fearless Girl that has led to controversy, standing as she is, facing the famous Charging Bull sculpture of New York city’s financial district. 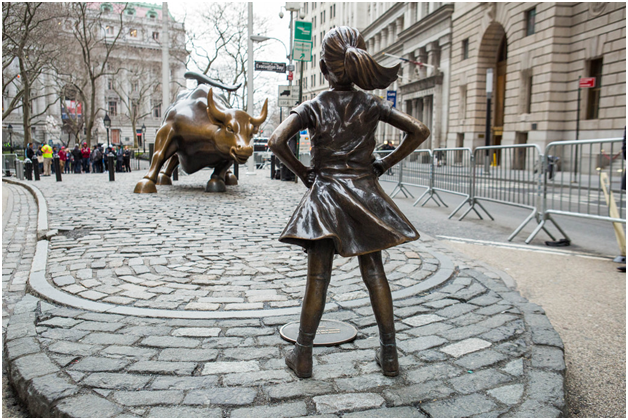 Standing defiantly before the larger, more aggressive male sculpture, she seems to send a message about women’s ongoing fight for equality, particularly in the male-dominated financial sector.

Originally intended to only stay for a short period, it was recently announced that the statue will be around at least until next year’s International Women’s Day – http://www1.nyc.gov/office-of-the-mayor/news/182-17/transcript-mayor-de-blasio-fearless-girl-statue-stay-nyc.

However, her presence is not a welcome one for the Bull’s original sculptor, Arturo Di Modica, who maintains that the Fearless Girl has changed and distorted the meaning of his sculpture from a symbol of prosperity and for strength into a villain. He also complained that he believes the commissioning company is simply using the statue for commercial gain and as an advertising gimmick. 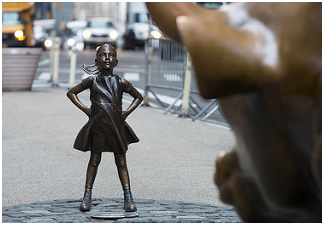 Although Di Modica has not yet commenced legal proceeding regarding the issue, statements from his lawyer, Norman Siegel, show he has serious concerns and hasn’t ruled out legal action. Siegel spoke about how issues regarding copyright and trademark need to be addressed, and whilst he confirmed neither of them has anything against the imagery of the statue itself, they are pushing for its relocation elsewhere in the city.

It’s strange to think such a simple thing as a metal statue of a little girl could cause such controversy. For most of us, the closest we get to metal models or structures are those in our gardens, such as those sold by Corten metal garden sculptures http://www.afsculpture.uk/scuplture-portfolio/corten-metal-sculptures.

Even the New York City Mayor, Bill De Blasio, weighed in with an opinion, recently tweeting that the Fearless Girl is needed because there are men who don’t appreciate women taking up space.

Meanwhile, whilst Visbal has some sympathy for her fellow artist and has referred to the bull as stunning and beautiful, she doesn’t appear to want to back down any more than her Fearless Girl does, recently stating that as the world changes, women are now running with the bull.