It’s been generally agreed upon that there are a few basic human needs for survival. At the very top of that list are two things: food and shelter.

Shelter has been a big problem in America, with our growing homeless population, but recently the Internet has been abuzz with photos of housing shelters constructed entirely of wooden pallets—in less than 24 hours.

The man responsible for this, Michael Janzen, has shared the plans on his web site.

Why Build A Pallet House?
In a word—survival. You never know what the future holds for you, and being prepared for any possible situation is always a good thing. If for whatever reason your house burns down, explodes, or is overrun by zombie hordes, you can learn how to erect a new home in a few simple steps.

All you need to construct your own pallet house are basic tools: saw, drill, framing square, tape measure, pencil, level, pry bar, hammer, and a few other items. And, of course, 50 to 70 pallets. The raw materials should be easy to acquire. Most companies would be happy to donate their used pallets to you. They typically have to pay to have them hauled away, so a few phone calls and they should be yours for the taking! 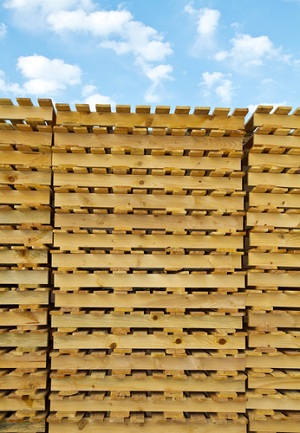 Janzen refers to the plans on his web site as plans for a “disaster preparedness and emergency shelter,” but you can use the plans to create anything you like: A second home, or just a kickass fort.

From Janzen’s site: “As hurricane Gustav plowed across Cuba headed for the gulf coast of the United States memories of Katrina and the potential displacement of thousands got me thinking. I wanted to do something to help. It occurred to me that someone else might find what I know about building with shipping pallets useful in the coming weeks and months.”

A Truly Green Initiative
Not only is the pallet house an incredibly cost-effective form of shelter, it’s also great for reducing one’s carbon footprint. Each year, hundreds of thousands of shipping pallets are thrown into landfills. Did you know that approximately 40% of all the hardwood that’s harvested in the United States is used to make these pallets? And two-thirds of the United States’ pallets are thrown out after only ONE use!

By using this, you’re helping to curb waste. You’re reducing the amount of trash in the world, you’re repurposing the wood for a long standing shelter, and on top of all that, you’re helping prevent deforestation.

Potential Uses
The Pallet Home could very well be an elegant solution to one of America’s biggest epidemics—homelessness.

Think about it—materials that are essentially free. Plans that people have put on the Internet for all to enjoy. They can be built quickly and simply. The only thing missing here is the land to put these structures on. If governments would be willing to donate unused land, we could house many of the country’s homeless.

So whether you’re looking to survive the zombie apocalypse, or you just want to make sure you’re protected, learning how to construct a shelter is a handy skill everyone should have.