The Old Government Buildings in New Zealand were built in the late 1870’s in Wellington and was, at the time, the second largest wooden building in the world for more than a hundred years. Concrete prices were too high at the time and so builders turned to wood, using kauri wood in this structure. You wouldn’t see this type of structure anymore as kauri is now a protected type of forest in New Zealand.

Whether you’re a believer or not, the Noah’s Ark in the Creation Museum of Kentucky is quite an impressive spectacle. It was built to the same specifications as written in the Bible, measuring 510 feet long, 90 feet high and consists of more than 600 miles of wood planks. It can boast being one of the biggest wood-framed buildings on earth.

For a cake shop with a real difference, take a visit to SunnyHills, Japan. This building has an incredible wooden lattice structure on the outside and the architect, Kengo Kuma, modeled the building after a bamboo basket. The Japanese technique of Jiigokugumi is used to join all the wooden slats without having to use glue or nails. For a timber frame construction company, visit http://www.qtfhomes.co.uk/. 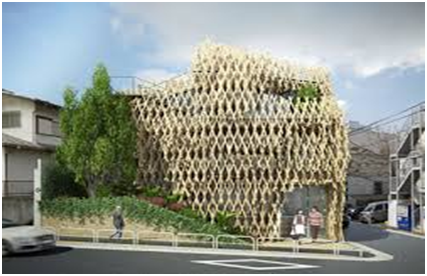 The Tamedia Office Building in Zurich is the seven story headquarters for media company Tamedia. Wood is the central focus of this structure and is reflected in both the exterior and interior of the building’s design. Opened in 2013, the building has also incorporated thermal barriers within the structure which heats and cools areas by extracting air and creating a sustainable surrounding of wood.

U Bein Bridge in Myanmar is the world’s longest wooden bridge and has been in position since 1850. It provides a passageway over mud flats and Taungthaman Lake at a height of about 15 feet. The bridge is made solely from teakwood and this 3,960 foot long bridge is still used daily by locals and tourists. Local legend has it that the teakwood was taken from a former palace.

Forte in Australia is a perfect example of how timber can be used in high rise buildings too. The building is more than 10 stories tall and opened in 2012, using cross-laminated timber to become Australia’s first 5 star, Green Star certified residential building. There are 23 apartments and a ground floor retail store. Australia is leading the world here in the use of timber construction.

Treet in Norway made the headlines in 2014 when it overtook the Forte building in Australia for height. Treet stands at 170 feet and started out as just being a sustainable project with a focus on wood. The designers were inspired by Norwegian timber bridges but soon realized that a world record could be set. Treet consists of cross-laminated timber modules which are stacked on top of each other. There are a couple of concrete slabs that engineers placed into the building, as it needed weight and to prevent it from swaying.