Racing cars began in the mid 19th century and has continued to be extremely popular ever since. The first ever race of two self-powered vehicles on a prearranged route took place at 4.30am on 30 August 1867. It covered a distance of 8 miles between Old Trafford and Ashton-under-Lyne in England. The winner was Isaac Watt Boulton. Boulton’s vehicle was made from an old John Bridge Adams light rail vehicle, solid fired steam carriages. 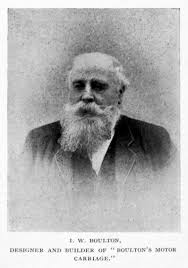 The first race in the United States included a reward for the winner. It took place on 16 July 1878 covering a 200 mile stretch from Green Bay to Oshkosh. Only two vehicles competed, the Green Bay and the Oshkosh, named after their town of origin. Real auto racing as we would recognise it today began soon after the construction of gasoline-fueled vehicles. The first organised contest occurred in France on 28 April 1887 and covered 2 km.It was won by Georges Bouton but as he was the only competitor to turn up, of course he won!

It is said that the world’s first motoring competition was between Paris and Rouen and was organised by the Parisian magazine, Le Petit Journal. It was pretty much a marketing exercise, aimed at boosting circulation by using a publicity stunt. It was billed as a competition for horseless carriages that was safe, easy to drive and cheap. 102 competitors paid the entrance fee and 69 cars began the 31 mile selection event. There were some big names present, names that would stand the test of time such as Peugeot. Out of the 69, only 25 were selected for the main event. The official winners were Peugeot and Panhard for cars judged on speed, safety and handling. You can be sure that they had their own versions of Breakdown Recovery Swindon companies available just in case anything happened to the cars.

Purpose built racing circuits were soon to follow and the first race on one happened in 1899 at the Branford Park horse track in Connecticut. The Milwaukee Mile is the second oldest race track still in existence and has been there since 1903. Knoxville Raceway in Iowa is the oldest racing venue, built in the late 1800’s for horseracing but held an automobile race in 1901. The first official race here was not until 1914.

Brooklands in Surrey was the first purpose built motor racing venue and opened in 1907. It was a 2.75 mile concrete track with purpose built banked corners for high speeds. Brooklands was also famous for aviation with Vickers setting up a factory there during WWI. During the Second World War, racing was postponed as the area was given over to aircraft production. The damage done to the  track meant that it was never operational again.

Racing soon spread to other parts of the British Empire too with the first Indian competition being held in 1905 by the Motor Union of Western India. The course went from Mumbai to Delhi, a huge distance of 810 miles. The idea of staging the race was to show India the automobile and see how cars would perform in the hot Indian conditions.