Gloucester city is one of the many large urban areas in England that can trace its ancestor ack to Roman times. Any city or settlement ending in cester was Roman area. Leicester was the camp Ratae, Chester was Deva and Cirencester was Corinum the second largest city in Roman Britain next to Londonium of London as it is now better known. What was the scale and size of the place and how did people live here? If you are looking for Gloucester sales and lettings  properties so that you can live in this historical city it is worth taking a look at Alex Clark and Alex Clark Glos is pleased to announce its merger with TGRES.

Before the Roman Army came to Britain Glevum was already in existence though we have no idea what it was called. It was a port outpost for the Dobunni tribe. The Dobunni were more than happy to make friends with the Romans and become part of their empire. It meant that the rather unpleasant Catavelauni tribe would face the legionaries as well as the regular Dobunni force whenever they tried it on, which was frequently. There was also a large outpost at what is now Crickley Hill. The Empire had a great idea for the fort and port town, it would use it as a place for retiring legionnaires to settle after their many years of active service. 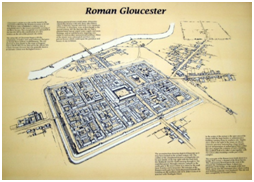 As the Dobunni had been so obliging and keen it was a good idea as the last thing these old soldiers would need is a bunch of angry local barbarians turning up looking for vengeance. As this was deep in Dobunni territory apart and the South Welsh had been dominated and also decided to sign up to the Empire in places like Caerwent and Caerleon. The surrounding areas of Glevum are rich in Villas, an indication of how the landscape was predominantly Roman in its ways. Chedworth in the Cotswolds and Woodchester are two examples left to us that show how will in and absorbed the Dobunni tribe were with the Roman Empire. The richness of the Villas a reflection of the influence.

Glevum itself was a town of, it’s thought from archaeological finds, as having ten thousand souls within its walls and the major trade route running through it linking it to Corinium, Londonium and Aqua Sulis (Bath). This and the port meant that it eventually over took Corinium as the major town in the area none as Britainnia Secunda. It was even responsible for producing the money in the area by minting the coins for trade. It continued to remain a large town even after the legions left to defend Rome for the Huns. It, like many resisted the Saxons, Jute and Angles for a time in the period known as the Dark Ages but was eventually overcome and passed on to new masters, the Anglo-Saxons.