Its common knowledge that dust can cause a range of health problems. Whilst most are considered minor issues, such as sneezing, coughing and irritation to the eyes, others can be seriously hazardous to our lungs. Lungs have special defence mechanisms to protect them from the dust we are constantly breathing into our bodies. These mechanisms will remove the dust particles, but sometimes people will still experience respiratory problems, especially those who suffer from asthma or other breathing difficulties. 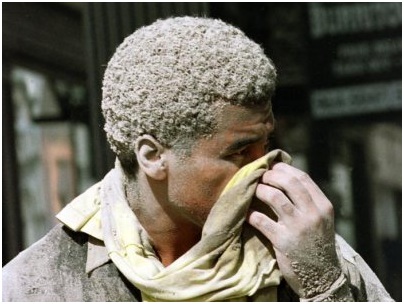 Putting it in Perspective

Since lungs are used to bring oxygen into the body and releasing carbon dioxide, overexposure to dust can limit the amount of oxygen contained. Despite the effectiveness of the strong defences carried out by the lungs against dust, excessive dust inhalation can lead to disease.

The defence mechanisms we are referring to, come in the form of bronchi and bronchioles, which are essentially the breathing tubes leading to the lungs. These tubes are filled with cells and mucus that is present in order to catch dust particles. According to CCOHS, Cilia, the microscopic hairs lining the walls of the tubes, help to carry and move the mucus up and out of the body. If dust makes in to the lungs, they will be swallowed by macrophages cells. This can also be helped along by proteins which will neutralise the dust particles.

What Happens when these Defences Fail?

If the lungs fail to get rid of the dust particles present in the body, they will settle in the lung tissue. This can lead to lung injuries, the extent of which will be determined by the type of particles involved. Toxic particles can cause fibrous tissue formulation or scarring.

People who have respiratory conditions such as asthma or emphysema, for example, may experience worse symptoms when they are overexposed to dust particles. Lung function is reduced when the breather is breathing in high concentrations of dust, according to Healthy WA. Breathing disorders such as chronic bronchitis is amongst the most common lung diseases to derive from breathing in too much dust.

What can be Done to Stop it?

The only effective way to reduce the likelihood of developing such health problems is to control your exposure to dust. This can be quite tricky. One of the best ways to defeat this problem is to make sure that the ducts and vents in all commercial establishments are kept clean. Vents and ducts act as the perfect breeding ground for bacteria and dust. Newcastle Duct Cleaning company http://www.enviro-group.eu/duct-cleaning-newcastle/, will ensure that all traces of dust particles are removed to provide exceptional productivity and quality indoor air quality 24/7.