Sigiriya or Lion’s Rock, is an archaeological complex located in Sri Lanka, specifically in the Central Province, in the district of Matale. There are the ruins of an old palace, a monastery and other buildings, built on a large rock known as Lion’s Rock. Sigiriya, the Lion’s Rock is the treasure of Sri Lankaand was declared a World Heritage Site by Unesco in 1982.

This fortress is a natural watchtower that served as an element of vigilance and defense since it allowed to see the enemies from afar. After a long history of about 5000 years, it was abandoned, being rediscovered in 1908 , being today spectacular to imagine what it would suppose millennia before in its time of splendor. 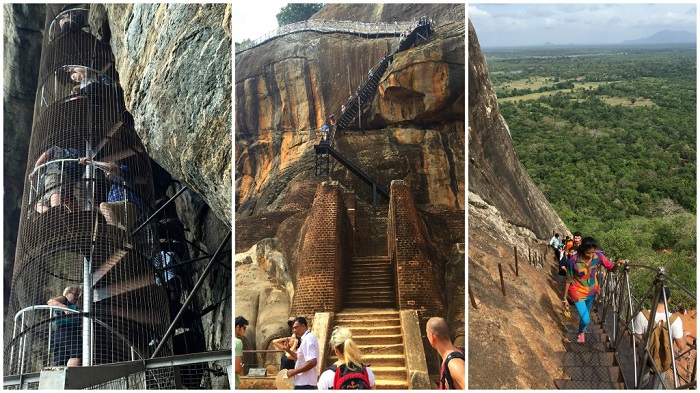 As an advance of what we are going to find, from the entrance we are enjoying the Royal Gardens , a wide expanse of land with buildings, swimming pools and other low buildings, flower beds and trees of all kinds. Seeing its size and height, presumably to make this construction would be used many draft animals to carry the bricks and other elements. Probably they would be used elephants, oxen and the like.

The climb to Lion’s Rock is pretty tough . The beginning is of the most spectacular. Between two giant lion’s claws carved in the stone, there are stone stairs of about 20 steps , giving way to the metal staircase nailed to the sides of the great rock. If the wind blows, the sensation is vertiginosa.

After a few steep flights of stairs, those who suffer from dizziness will become endless , when the panting begins to cover the comments of those who climb, suddenly the giant nests of wasps are sighted soon after beginning of the ascension.

They are large black hornets, located on the side of the rock, at half height. If you look at the photo you will see two black spots on the left of the image and on the dividing line, another three or four more. Those are the great hornets.

That is where you will remember a sign that we had seen down the entrance. At that moment, the silence will take control of all and will try to continue climbing quickly and without making fuss. Luckily, the day I climbed there was no attack of wasps and we all managed to climb without bites, without more annoyance than some feeling of tiredness after the ascension.

Once you have finished climbing the stairs, you are waiting for another complicated section, climbing the last part on a spiral staircase that gives access to the most artistic part of this wonder: Cobra cave, where you will see the paintings of half-naked women In stone, made with the technique of “frescoes”.

It is striking how “bold” these paintings represent women – it is not known whether concubines, wives or a kind of priestess . In any case, its charms do not go unnoticed to the visitors.

When you leave, you reach a wall so polished that it is known as Mirror wall, finally acceding to the upper area or terrace , where the ruins of what was the palace, the monastery and other buildings of the time will leave you speechless.

The views are stunning . You can see the size of the rock, the extent of the gardens at the base and the solitude of the rock in the surrounding plain. It is also curious to see a sign that comes to say, “ Refrain from throwing objects, ” which drew our attention powerfully by using the word Refrain that seems to indicate, “ restrain your desires .” We assume that before putting it on, there would be a lot of kafras to throw things down.

The visit is well worth it, although it costs about 30 dollars the entrance. It is an indispensable place, as much for the contemplation of the frescos and the constructions as for the views from the heights. It is also very gratifying the experience of the ascent to Sigiriya, the Lion’s Rock, without a doubt one of the most beautiful and popular treasures of Sri Lanka.